1. If there was a movie produced about your life who would play you and why?
Well, me, of course. How else am I going to become an actor in Hollywood?

2. What songs best describe your work ethic?
Anything by AC/DC. OK, maybe not ‘work’, but it certainly puts me in a mood to get sh!t done.

3. A cat walks into the room wearing a leisure suit. What does he say and why is he here?
Meow, meow, MEOW, mew, mew, meeeeeeeeeeooooowwww….
Roughly translated, that’s “I have a $10,000 reward for the man who dressed me in this…”

4. If you could visit any place in the World, where would you go and why?
Well, we’re in Thailand right now, with every intention to visit Europe next year and eventually, South America. Would love to visit Dubai or one of those seven-star hotels if money weren’t an obstacle.

5. What’s the weirdest thing you’ve ever eaten?
Bugs. Thai street food stalls sell plenty of varieties. I was, erm, slightly intoxicated, and don’t remember which ones I ended up swallowing. They’re deep-fried, so they actually taste like chicken a bit.

6. What book(s) are you reading now?
Write. Publish. Repeat. by Sean Platt and Johnny B. Truant. An excellent book about self-publishing and publishing / promoting your work.
Also, Let’s Get Visible by David Gaughran. Same subject, different angles, but some similarities.

7. If you could sit and chat with any historical figure who would it be and why?
The Buddha. His followers aren’t known for the extremism of other religions, and after visiting enough temples celebrating the man that I feel like I know him.

8. What would your slogan be for your life?
Don’t. Stop. Exploring.

9. What do you want to be when you grow up?
If. If I grow up, not when. Key term here. I’m 32, and have yet to figure out this whole ‘grown up’ thing. The only thing that’s better about being a grown up is that when you go to the Dairy Queen, the workers don’t patronize you and ask you if you’ve been saving your allowance or whatever.

In all seriousness, I want to travel the world, tell stories, take photos, and help people travel. That’s basically what I’m doing now. I simply want to do it better, more profitably…

10. What is something no one knows about you?
WARNING: SAPPY MOMENT APPROACHING!

Laura and I were traveling through Daejeon, South Korea – we saw a weird ship on the left as we pulled into Daejeon’s train station. We had a rough itinerary, but as soon as we saw the ship it disappeared behind us! We spent close to an hour at the train station, trying to figure out where and what this thing was – we’re nowhere near water, mind you. I looked over, and she was as earnest in looking for information as I was. I thought to myself, ‘this will be the woman I marry.’ We had been dating for about six months and things were getting serious… Eventually, we hopped in a taxi and found the ship – it was an abandoned wedding hall of sorts. It’s not technically open to the public, and not published on the blog since I’d rather not encourage people to go there themselves…

11. What piece of art have you seen that moved you?
Lots of Buddhist temples and Buddha images that are gorgeous. A number of ‘hell temples’ have some pretty crazy imagery as well, though most of it’s decidedly NSFW.

12. What was the last thing you geeked out about?
Star Wars VII. Looking forward to it.

14. If you could hear someone’s thoughts for one day who would it be and why?
A supermodel’s. If I actually *heard* any thoughts I’d probably die from shock.
A less lame answer? My wife’s – still trying to figure her out.

15. If you were trapped in a TV for a month what show would you choose to be in and why?
Seinfeld. At least then doing nothing and being about nothing would be easier. 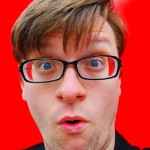 Chris Backe is the blogger behind One Weird Globe, a travel blog that focuses on the weird and offbeat destinations around the world. He’s lived in Asia since 2008, and is currently in northeast Thailand. He’s written over a dozen books and itineraries, and is working on a new book about offbeat Thailand, due out mid-2015.