You are here: Home / 15 Question Interviews / David Hogsette: Director of Writing at Grove City College, Cousin to the Domain Queen

1. If there was a movie produced about your life who would play you and why?
Gary Oldman—he can play anyone, and I appreciate his perspectives.

2. What songs best describe your work ethic?
Rush’s “Something for Nothing”

3. A cat walks into the room wearing a leisure suit.  What does he say and why is he here?
Why am I wearing this damned suit, and where are my boots!?!

4. If you could visit any place in the World, where would you go and why?
New Zealand—want to see where they filmed Lord of the Rings.

6. What are you reading now?

7. If you could sit and chat with any historical figure who would it be and why?
Jesus Christ. So many Christian churches and traditions seem to have gone astray, and I would love to know who or which theology is closest to the original truth.

8. What would your slogan be for your life?
Be yourself in Christ.

9. What do you want to be when you grow up?
A genuine man fully and unashamedly conformed to the very image of Christ.

11. What piece of art have you seen that moved you?
Canterbury Cathedral

12. What was the last thing you geeked out about?
My Macbook Pro screwing up…again…because I dropped a lot of cash to finally go Apple, and the expense has not paid off…

14. If you could hear someone’s thoughts for one day who would it be and why?
No one…I struggle enough with my own thoughts bouncing around in my head. The last thing I want is someone else’s messed up thoughts in there too.

15. If you were trapped in a TV for a month what show would you choose to be in and why?
Myth Busters. They have a lot of fun testing out urban legends and blowing stuff up.

David Hogsette's Bio
Starting in the fall 2014 semester, Dr. David S. Hogsette will serve as the Director of the Writing Program at Grove City College, where he will also teach literature courses for the Department of English. He has eighteen years experience as the Writ 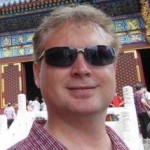 ing Coordinator at the New York Institute of Technology, where he collaborated with faculty across the institution to develop and revise such writing courses as first-year writing, research writing, technical writing, and professional document design and production.

He also teaches courses in English Romanticism (focusing on literary engagements with emerging 18th- and 19th-century sciences of life and the mind), Gothic literature, science fiction, and fantasy literature. His website: http://davidhogsette.com Dr. Hogsette received his doctorate in English Language and Literature at The Ohio State University in 1996, concentrating on English Romanticism, 19th- and 20th-century American literature, critical theory, and composition studies.

He has published two books, both through Wipf and Stock Publishers: Writing That Makes Sense: Critical Thinking in College Composition (2009) and E-mails to a Young Seeker: Exchanges in Mere Christianity (2011). He has also published articles on English Romanticism and Gothic studies in such academic journals as Christianity and Literature, Studies in Romanticism, Romanticism on the Net, and Critique. In addition to these academic pursuits, Dr. Hogsette is also an active martial artist, holding the rank of San Dan (third-degree black belt) in Matsubayahsi Shorin Ryu karate and Sho Dan (first-degree black belt) in Shotokan karate. He serves as the faculty advisor and head instructor for the GCC martial arts club. (He created this website for the karate club: http://shorinryukarate.club) Whenever possible, he tries to jam on his electric guitar and always is in search of someone to teach him how to play lead. He is also active in ministry work in China, serving orphans in Kunming and volunteer teaching in Yanji. He is currently partnering with the Chinese Christian Scholars Association in North America.

He and his wife, Renjie Liu, have a spastic but lovable rescue dog named Sydney.