1. If there was a movie produced about your life who would play you and why?
I guess I could play myself because I’ve already been in a movie – a film called Spring Fever that starred Susan Anton and Jessica Walter in which I played myself (as a local TV sportscaster in Florida where the film was shot in 1982). I had two scenes that the director had to shoot over and over because he didn’t think I gave a very convincing portrayal of myself! True story. The film didn’t go anywhere but someone actually uploaded the whole movie to YouTube – https://www.youtube.com/watch?v=mKiXquT6ZpY – which has to be a violation of both copyright and human decency!

2. What songs best describe your work ethic?
“Here Comes the Sun” by the Beatles. I LOVE what I do so when the sun comes up every morning I am excited about the day ahead. When you love what you do you never feel like you are working! I believe that being able to do what you love is far more important than money. Assuming you can cover the bare necessities, it is the key to happiness (I have another connection to this song as it was written by George Harrison. George’s sister Louise was a personal friend when we both lived in Sarasota and was a guest at my and Diana’s wedding 30 years ago this year).

3. A cat walks into the room wearing a leisure suit. What does he say and why is he here?
Well, number one – he doesn’t say anything. Cats can’t talk Silly! If he is there in a leisure suit he is obviously hoping that someone will help him get out of the d*$# thing! I don’t know why people insist in dressing their pets in clothes but if putting one in a leisure suit doesn’t constitute cruelty to animals I don’t know what does! If it is a male cat and you don’t get him out of it before the females see him he will NEVER get a date!

4. If you could visit any place in the World, where would you go and why?
I’ve visited most of the places I wanted to go to the most – Paris, Rome, London, Spain, Amsterdam, Australia, around the Caribbean and Mediterranean etc. But there are always interesting places left to see and the one I have never been to before and most want to see now is right here in the U.S – the Grand Canyon. We’re going to try to get out there next year. I want to take the train ride from Williams, Arizona down to the and stay a couple of nights in one of the lodges near the rim.

5. What’s the weirdest thing you’ve ever eaten?
Some people probably wouldn’t consider them to be weird, but certainly the most unpleasant thing I’ve ever tasted is peas! Ugh! I shudder just thinking about them. If I worked for the CIA and was captured by terrorists, all they would have to do to get me to sing like a canary would be to put a plate of peas in front of me and say “if you don’t tell us everything you know you are going to have to eat every pea on that plate!”

6. What are you reading now?
Well, obviously these interview questions! If you want to know what I will be reading later that would be Linda Ronstadt’s new autobiography – Simple Dreams. She is probably my all time favorite female vocalist. It is o sad that she is no longer able to sing due to Parkinson’s disease but fortunate so many of her great recordings will live on forever (loved seeing her inducted into the Rock & Roll Hall of Fame this year).

7. If you could sit and chat with any historical figure who would it be and why?
That would have to be Jesus. Two billion people on earth believe he was God. Even Elvis and the Beatles were never that big (despite what John Lennon said). So, aside from the fact that I am personally a fan, that puts him pretty high up in the pecking order when it comes to people any journalist would like an interview with!

8. What would your slogan be for your life?
I said it above – “Do what you love to do.” I’ve been fortunate to be able do that across three different careers, first radio/TV broadcasting, then running my own record stores, then stumbling into this business that as been the one I’ve loved most of all. There were financial ups and downs along the way but I have always been happy either way because I knew I would be doing something that day that I loved to do (not counting trips to the dentist, of course!)

9. What do you want to be when you grow up?
A grown up! My wife Diana tells me that apparently will never happen but who knows, maybe I am just a late bloomer!

10. What is something no one knows about you?
I had a very spooky experience involving a psychic in New Orleans. When I was there in January 1986 covering that year’s Super Bowl game my cameraman and I went into psychic’s little shop to film an interview in which – since she could supposedly see into the future – we wanted her to tell us who would win the game – the Bears or the Patriots. She said the Bears (who did indeed wind up clobbering the Patriots).

While we were there the cameraman had her read my palm to have some footage to go along with the story. While doing that she told me “You are going to be very happy in October – something big is going to happen in your life.” At the time I thought – well, that is too broad a prediction to mean anything. I tried to pay her but she refused any money which was very odd in itself – but nothing compared to what was to come. When I got home a few days later my wife broke the news that she was pregnant and our child was due in October. Sure enough, our daughter, who is now a doctor, was born October 10. A year after she was born we went back to New Orleans and I decided to take my wife and new daughter to the psychic’s shop to show her her prediction came true. When we got there the storefront was vacant. Disappointed, I went into the shop next door and asked the owner if he knew where the psychic had moved to. He looked at me like I was nuts and said “I’ve been here for years and that space has never had anyone in it as long as I have been here.” When I got back home I told my incredulous cameraman and we went through our tape library so we could take another look at the original recording, but no matter how hard we looked we never found it! Still the oddest thing that has ever happened to me!

11. What piece of art have you seen that moved you?
We were in Rome this summer and got to see Michelangelo’s astonishing painting of the ceiling of the Sistine Chapel for the first time. That an artist can take paint and create such breathtaking beauty with it makes you feel good about the human race.

12. What was the last thing you geeked out about?
You have to remember that the original definition of geek was a circus or carnival freak who bit the heads off of live chickens! That disgusting image comes to mind when I hear the word so I try to never geek out – especially if any chickens are in the vicinity!

13. Name 5 things from your bucket list?
Well, I actually only have one thing on my bucket list. That is to live forever. I figure if I can do that then there would be no point in adding anything else to the list!

14. If you could hear someone’s thoughts for one day who would it be and why.
My own. My hearing is getting really bad so if I could hear myself think that would mean it is getting MUCH better!

15. If you were trapped in a TV for a month what show would you choose to be in and why?
I WAS trapped in a TV for 18 years (though they did let us go home at night so they didn’t have to pay us overtime). If I did have to go back in I would probably want to be in reruns of the original Superman series with George Reeves (maybe I could be cub reporter Jimmy Olsen!) I would watch that show every afternoon when I came home from grade school, then tie a towel around my neck and run around the neighborhood jumping into the air like a lunatic. The neighbors thought I was rowing with one oar in the water but I didn’t care – I was fighting for truth, justice and the American way! You think I got some strange looks then – you should see how the neighbors look at me when I do it today 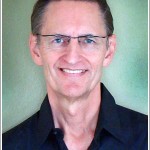 Ron Jackson is the Founder, Editor and Publisher of Domain Name Journal, the domain industry news magazine at DNJournal.com. Jackson was a television reporter with ABC and CBS stations in Florida before beginning an entrepreneurial career that led him to the domain business. When he discovered that this dynamic industry had no trade magazine of its own he established DN Journal and the publication rapidly became an industry institution. DN Journal is the source mainstream media outlets like the Wall Street Journal, USA Today and the New York Times go to when domain related stories are in the news.