1. If there was a movie produced about your life who would play you and why?
James Gandolfini because he is dead so using him would be a challenge. Also, I am big, angry, prone to fits of violent rage,but also cuddly.

2. What songs best describe your work ethic?
Bear Necessities by Louis Armstrong in Disney’s story about my life- JungleBook. https://www.youtube.com/watch?v=xJGRdteGr84

3. A cat walks into the room wearing a leisure suit. What does he say and why is he here?
I don’t like cats so I would just say “nice suit, dude” without giving off any specist vibes.

4. If you could visit any place in the World, where would you go and why?
Derweze: http://en.wikipedia.org/wiki/Derweze

6. What are you reading now?
I think the secondbook of the Mongoliad saga,but who really knows on Kindle without the pretty book covers

7. If you could sit and chat with any historical figure who would it be and why
If by ‘chat’ you mean sleep with then I would probably head back in time to India and find one of the courtesans who inspired the Kama Sutra. Sorry, I am not into conversation unless it precedes or proceeds sex.

8. What would your slogan be for your life?
Humans aren’t real, monkeys are.

9. What do you want to be when you grow up?
Anything but an adult.

10. What is something no one knows about you?
The charges were dismissed without prejudice.

11. What piece of art have you seen that moved you?
I guess the fact that I compared myself to an exotic temple dancer means I was moved by this painting: http://www.quora.com/Hypothetical-Scenarios/If-you-were-to-be-a-world-famous-painting-which-painting-would-you-be/answer/Sanjay-Sabnani

12. What was the last thing you geeked out about?
Bitcoins. I am bitter now since my geekiness often puts me into things way before there is money involved. Then my absent minded nature makes me forget and move on to the next topic. http://www.quora.com/Bitcoin/What-is-it-like-to-lose-a-large-amount-of-Bitcoin

13. Name 5 things from your bucket list.
In my bucket I would carry my wallet, keys, smart phone, charger cable, and condoms. I prefer to carry these items in my pants, but if I only had a bucket then this is what I would bring. Condoms are to carry water since I suck at pottery

14. If you could hear someone’s thoughts for one day who would it be and why?
Someone too stoned to think. I find people to be generally uninteresting, but I am somewhat fond of stoners. They have good snack ideas.

15. If you were trapped in a TV for a month what show would you choose to be in and why?
Lost. For obvious reasons. 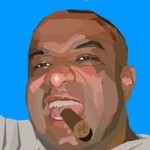 Prior to founding and taking CrowdGather public, Sabnani was an accomplished senior executive at several dynamic public companies in the technology and medical sectors. He has extensive deal making and transactional expertise having been involved in significant equity and debt capital raises. Sabnani is also a former financier and securities principal with extensive capital market relationships.

Sanjay Sabnani has also served as Chairman of the Board for Artwallah and TiE (The Indus Entrepreneurs) Southern California, both non-profits.

He is published in two medical text book chapters as the only non M.D. or PhD contributor, and has authored and received patents based upon his understanding of the GABAa receptor complex and its implication in anxiety, addictive, and eating disorders.

On the rare occasion that he has spare time, Sabnani is focused on writing a book about his theories on the biological underpinnings of anxiety from a systems approach.

My passion: New Mechanism That May Underlie Addictive and Anxiety Disorders by Sanjay Sabnani on Scattered Thoughts